Investigation of surface by means of SNOM

As well known the classical resolution limit of conventional optical microscopes which arise from diffraction on objective is equal to λ/2. It is deduced from approximation of flat waves, i.e. objective situating at the wave region of object radiation and light waves which come from this object may be considered as flat waves. Then limit is deduced from distribution light field in image plane of objective with help of Fraunhofer diffraction on round aperture. Distribution of the signal in the image plane is as shown in Fig. 1. 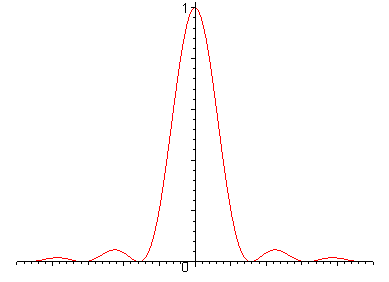 Figure shows that main portion of energy (about 84%) is contained in central diffraction disk. This Airy disk will be image of luminous point.

In accordance to Rayleigh criteria a resolvable distance of device lmin is equal to distance between two luminous points on conditions that distance between centers of Airy disks equals radius of one disk. From above we may conclude that

. Then we may say that objects less than 0.4·λ does not resolve by means of conventional optical microscopes. It is principle restriction.

In order to examine the resolution limit of SNOM we will use so-called model of two-points doublets, where probe and sample are considered as balls with small diameters (in compare with wave length and distance between probe and sample). From this model we may find that extremely resolution because of absorption is

(small absorption). Then extremely resolution is about 10 nm.

In present time SNOM able to resolve structure with characteristic scale 50-100 nm. Investigation of surface with the help of SNOM has series of advantage in comparison with conventional optical microscope, namely: 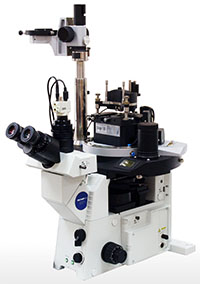 NTEGRA SNOM can work in next optical modes:

Next image shows optical scheme of microscopes, which explain these regimes:

Intensity of optical signal obtained by detector in each points of measurement is used for forming of SNOM image. For example, if sensor collect reflected light, then absorption factor and reflectivity factor may be studied. Let it be coefficient

, where I-intensity of useful signal,

- intensity of incident light. The more r, the bigger reflectivity factor. If r is small then it is necessary to have great ratio of signal to noise. It follows that nonoptical schemes of holding of probe is very useful in such cases.

SNC080 may be used for investigation of cellular creations, molecule of DNA, viruses, property of semiconductors, for obtaining structures with characteristic scale about 1/10 wavelength, for realization of spectroscopy of biological object (as a rule with help of UV radiation), for observation of process of chemical reaction, also as means of conventional microscopes.

To hold the optical probe near surface nonoptical schemes with quartz as sensor is used. It allows to increase ratio of useful signal to noise in comparison with optical holding schemes. It is very important at operations with limiting resolution. Also photoinduced carries does not appear. It is necessary requirement when some properties of semiconductor are investigated.

At the heart of nonoptical method for obtaining of information about surface lies idea to use response of quartz attached to optical fiber on interaction with surface. System fiber-quartz is excited in transverse vibrations with help of external feed element on quartz resonance frequency. Further piezoeffect is used: in the presence of mechanical oscillations electrical outputs of quartz have voltage response, which is used as information signal about amplitude of fiber oscillation. Next image shows Shear-Force schemes: 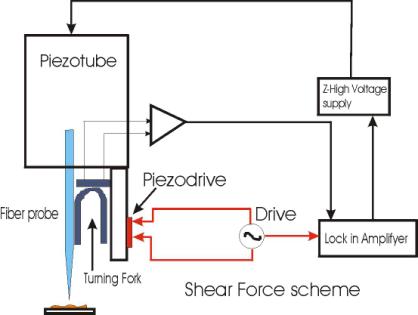