At the same time with the use of SPM of special designs (with different liquid cells) researches of living biological samples, without fixing are carried out.

Both those and other SPM techniques of cells researches possess of the certain advantages and disadvantages.

The objectives was to investigate the morphological parameters of the fixed blood cells with most known of used methods of fixing for carrying out the SPM measurements and of the living cells with their natural adhesion to a substrate, and also to compare the results to find the optimal method for biological sample SPM investigation.

The object of investigation was human blood cells - polymorphonuclear neutrophils (PMN). For fixing of cells the methanol and glutaraldehyde was used.

The object of investigation from venous blood of healthy volunteers. Erythrocytes were lysed with ice-cold isotonic NH4CL solution for 12 min, 00 С. The remaining granulocytes were washed with PBS and resuspended in HBSS at a concentration of 2.106 cells/ml. Then, 0.05 ml cells from each test were placed on (glass) slides. Neutrophils become spontaneously adherent.

Smears were washed by distilled water and dried in the air.

Investigations of fixing cells on air: the contact mode for investigate the PMN on air was chosen. In some cases (especially with the glutaraldehyde fixation) we observed the catching of biological sample by SPM-probe because of lateral force. To minimize this effect the scan rate was selected at the level of 0,5-1 line/sec.

The investigation of fixing cells was not difficult. About 30 cells were scans on air.

Investigations of living cells on liquid: When we are scanning the living cells it is necessary, that they have been adhesion on a surface of glass very well. As we worked with neutrophils without fixing preparations (f.e. polilisin) we used buffer solution of Henks, because it contains ions of calcium, and adhesion is calcium-dependent mechanism.

In noncontact mode about 20 living cells were investigated.

We used contact Si probe CSG11 (NT‑MDT SI) with spring constant 0,03 N/m, curvature radius of tip 50-60 nm, and tip height 10-20 mkm. Resonant frequency was selected within15-40 KHz. Scan rate in this method was about 2 line/sec. Decrease of the scan rate led to more mechanical damage of sample by silicon probe.

Statistic analysis was made in Origin 5,0 Server.

Special preparation of the probes for investigation in liquid. Contact Si probe CSG11 was preliminary rebated by scanning the Si sample. The cantilever deflection value was 3-5 times more than during researches with standard contact mode.

During the investigations of living cells we observed the boundary of cell, nucleus and inclusion granules of cytoplasm. The clearly segmented nucleus was especially well seen on lateral profile of the cell there the small ledge is a granule of cytoplasm and two big ledges are cell nucleus (Fig.1). 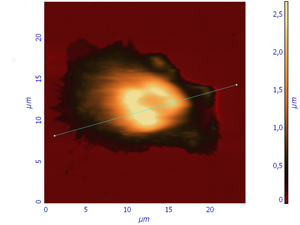 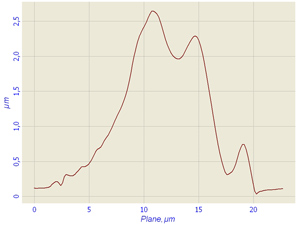 Also we observed the neutrophils where the nucleus was defined badly, however could be revealed using profile of the cell. Cells had the round form. In this case only adhesion of a cell to a glass surface, but not it spreading was observed only. Practically all cytoplasm appears concentrated near a nucleus. That decreases the resolution of a cell. Granules of cytoplasm are not identified practically. The cell has a rough surface that also could be seen on cell profile (Fig.2). 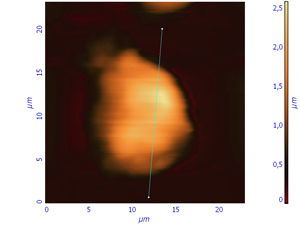 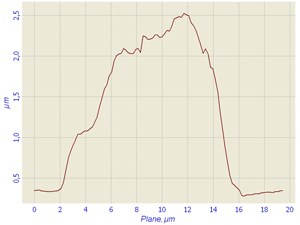 During the investigations of cells fixed by methanol the boundary of cells, granules of cytoplasm and nucleus are defined clearly. The cell fixed by methanol practically loses the water and completely spreading on a substrate. It sharply changes the morphological parameters of a cell.

The resolution of scanning probe microscope is higher for "hard" fixed biological objects on air than for "soft" living cells. 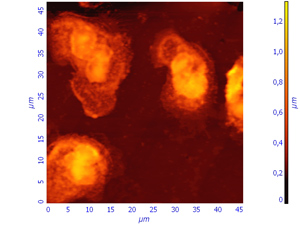 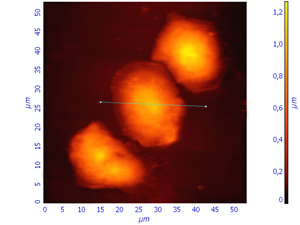 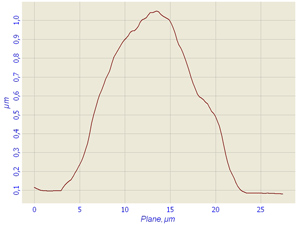 Statistic analysis was show that height and lateral size of living cells are considerably and authentically differ from the fixed analogues.

Morphological parameters of the polymorphonuclear neutrophils

The cells sizes were changed by any fixing method: fixing by methanol changes the cells height and fixing by glutaraldehyde changes the lateral size of the cells generally.

But using the fixations has some advantage compared to living cells:
(1) Long storage and repeated research of a sample through the certain time intervals;
(2) Transportation possibility;
(3) High lateral resolution for detail cells investigation.

Therefore for research of the different cell processes and morphological changes, accompanying these processes it is more convenient to use investigation in a liquid environment of living samples. And for visualization of small details of changes (especially, nucleus and inclusion granules of cytoplasm) it is better to use methods of fixing by methanol.